Let me begin by telling you a bit about just what it is that makes Alaska such an attractive and magical place. The name itself–derived from the native Aleut word “alyeshka,” meaning “The Great Land”–is suggestive of its immense scale and grandeur, as well as of the respect its native inhabitants hold for the land. By any measure Alaska is a huge, spectacular, and incredibly diverse land, one of the last and greatest unspoiled wildernesses on earth.

The 49th state is a virtual sub-continent, characterized by vastly differing regions, climates, habitats, landscapes, cultures, and lifestyles. It is also a wild and young land, a land where remnants of the last ice ages still linger, and where powerful tectonic and other geological forces struggle perpetually against one another, often violently so. Alaska even today thus continues to be forged and transformed by the great forces of nature to a degree unimaginable to those in most of the more populous regions of the world. Mountain ranges rise ever higher; once-mighty glaciers spill their ages-old ice into the sea or recede into the mountains, leaving huge and well scoured U-shaped valleys in their wakes; earthquakes tremble, dropping coastlines 20 feet or more in a matter of moments, dragging mountains down with them; and volcanoes spew climate-altering ash into the jet stream.

Yet while natural forces continue to mold the land, Alaska remains a country that is mostly still untouched by man. Despite the relatively recent arrivals of the industrial, jet, and information ages, and all of the developmental pressures they have been brought to bear, wildness remains Alaska’s predominant characteristic.

Even today it remains a place where the frontier meets the wilderness, where man confronts nature and its many challenges. This tension–between exploitation and preservation of the land and its resources–has defined Alaska’s human history. It’s an increasingly delicate balance. While “progress” has indeed begun to leave its scars even on various parts of remote Alaska, the great majority of the land remains pristine and undefiled by man. Keeping it that way–preserving and celebrating the sanctity of its wildlife, native cultures, natural resources, and indisputable majesty for future generations–has emerged as the fundamental challenge of the 21st century.

A Land of Superlatives 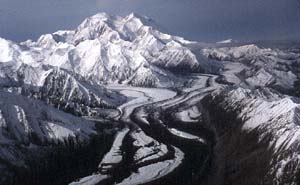 By any standard, Alaska is BIG! How big? Here are a few facts and figures to chew on: Alaska possesses six distinctive geographic regions; at least nine major mountain ranges (some of them 1,000+ miles long and featuring an unfathomable number of 10,000+ foot peaks, not to mention Denali–formerly known as Mt. McKinley–North America’s highest mountain (and, due to its base being so close to sea level, taller bottom to top than Mt. Everest); 50+ active volcanoes; tens of thousands of miles of coastline; numerous ice fields, each spawning countless glaciers; 30,000 rivers; and more than 3 million lakes (!).

If one were to superimpose a map of Alaska onto one of “The Lower 48” US states, Alaska’s extremities would stretch from Georgia to California east to west, and from Canada to Mexico north to south. It’s that big. And with only ~700,000 people living in its approximately 600,000 square mile area–nearly half of them in Anchorage–it remains for the most part a largely uninhabited wilderness. If New York City had the same density of population that Alaska has, there would be a mere 19 people roaming the streets of that metropolis. Just to give you an idea. The Great Land has been called the “American Serengeti” thanks to its variety and profusion of spectacular bird- and wildlife. Alaska features some of the largest and most important estuaries and bird breeding grounds in North America, and is home to huge numbers of a wide variety of mammal species, including the largest and most intriguing wild animals that roam the continent: brown (grizzly), black, and polar bears; herds of pre-Ice Age caribou that can number in the hundreds of thousands; millions of moose; white Dall mountain sheep; numerous wolf packs; dam-building beavers; even lynx, wolverines, and prehistoric musk oxen (as well as a plenitude of marine mammals, including whales, sea lions, sea otters, seals, porpoises, walruses, and others). From pika, vole and marmot to wolves, grizzlies, and orcas, the food chain remains intact in Alaska as in few other places on earth. The diversity of ecosystems that support this wildlife is equally intriguing. Arctic, sub-arctic, boreal, and temperate/marine regions feature immense tracts of boreal forest, rolling tundra, scrub taiga forest, and swampy muskeg, each characterized by an often surprising profusion of their own distinctive varieties of trees, plant life, and wildflowers.

Such wide-ranging and diverse ecosystems, at the far limits of human interference, and with their evolutionary food chains intact from bottom to top, are the reason that wildlife continues to proliferate in Alaska as it does few other places on earth.

In human terms, Alaska features a fascinating variety of peoples, cultures, and languages, each with their own fascinating histories. Native Americans entered the Great Land from Asia via the Bering Land Bridge in a series of waves beginning 10,000 or more years ago, at the tail end of the most recent ice ages. These peoples were nomadic hunters and gatherers, unaware of their role as “discoverers” or pioneers of the American continent. They rather were in pursuit of great herds of caribou, and other now extinct mega-fauna (including mammoths, saber tooth tigers, mastodons, and flat faced bears). Seafaring people–popularly known as Eskimos–arrived later, traveling in skin boats.

Various contemporary cultural groups include the Athabaskan, Tlingit, Tsimshian, and Haida Indians, the Aleuts of the Aleutian Islands, the many Inuit (Eskimo) groups, and of course the European and other peoples who have more recently pioneered the country. These latter day “discoverers,” more often than not, came in search of riches and exploitable natural resources of one sort or another: otter pelts, salmon, gold, copper, lumber, and, most recently, oil. The Call of the Wild

Ever since adventurer extraordinaire and Sierra Club founder John Muir first journeyed to Alaska in 1879 and then heralded its glories to the world in his fine book “Travels in Alaska,” another kind of pioneer has been discovering the Great Land: the tourist. Tourists come today in search not of the material riches of the trapper or prospector, fisher or oilman, but rather to discover more intangible, priceless treasures. In fact, many of them come for the same reasons Muir did: to witness for themselves a larger than life land seemingly lost in time; to experience and be challenged by nature in one of its grandest, most majestic manifestations.

Happily, Alaska today is more amenable to travelers than it was in Muir’s time. A modern international airport in Anchorage connects it to the world; and a good, if limited highway and road system renders the once remote, forbidding land accessible to more than just the armchair traveler. While the majority of Alaska visitors today come via luxurious cruise ship or on prepackaged, generic coach tours (insulating themselves from the real Alaska in the process), more independent, adventurous souls are free to directly experience Alaska for themselves to a degree never before possible. The call of the wild is at least as real today as it’s ever been. Now, however, thanks to ever cheaper Alaskan airfares, a dramatically improved infrastructure, and low cost adventure outfitters such as Get Up and Go! Tours, following through on that primal impulse is a real possibility not just for the rugged explorer or the super rich, but for anyone with a reasonable level of fitness, a little time and an adventurous spirit.

Hike the tundra, kayak up to the face of glaciers, raft raging mountain rivers, witness the bears and caribou in their natural environs, marvel at the midnight sun: experience wild Alaska for yourself this summer with Get Up and Go! Tours. You’ll be glad you did.

When you sign up for any of our combination tours you’ll receive a $50 lodging credit/discount, to be applied to the Anchorage hotel or hostel of your choice

*Note: The “+” sign indicates that there may be one or more unguided/free additional layover days in Anchorage between tour segments.